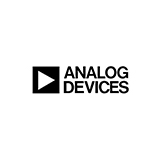 The company was founded by two MIT graduates, Ray Stata and Matthew Lorber in 1965. The same year, the company released its first product, the model 101 op amp, which was a hockey-puck sized module used in test and measurement equipment. In 1967, the company published the first issue of its technical magazine, Analog Dialogue.

In 1973, the company was the first to launch laser trim wafers and the first CMOS digital-to-analog converter. By 1996, the company reported over $1 billion in company revenue. That same year, Jerald Fishman was named President and CEO, a position he held until his death in 2013 (see below).

In 2000, ADI's sales grew by over 75% to $2.578 Billion and the company acquired five companies including BCO Technologies PLC, a manufacturer of thick film semiconductors, for $150 million.
In January 2008, ON Semiconductor completed the acquisition of the CPU Voltage and PC Thermal Monitoring Business from ADI., for $184 million.

In July 2016, Analog and Linear Technology agreed that Analog would acquire Linear in an approximately $14.8 billion cash and stock deal.

Analog Devices (NASDAQ: ADI) is a world leader in the design, manufacture, and marketing of a broad portfolio of high performance analog, mixed-signal, and digital signal processing (DSP) integrated circuits (ICs) used in virtually all types of electronic equipment.

Since their inception in 1965,they have focused on solving the engineering challenges associated with signal processing in electronic equipment. Used by over 100,000 customers worldwide, our signal processing products play a fundamental role in converting, conditioning, and processing real-world phenomena such as temperature, pressure, sound, light, speed, and motion into electrical signals to be used in a wide array of electronic devices.They focus on key strategic markets where their signal processing technology is often a critical differentiator in their customers' products, namely the industrial, automotive, communications, and consumer markets.

They currently produce a wide range of innovative products—including data converters, amplifiers and linear products, radio frequency (RF) ICs, power management products, sensors based on microelectromechanical systems (MEMS) technology and other sensors, and processing products, including DSP and other processors—that are designed to meet the needs of our broad base of customers.