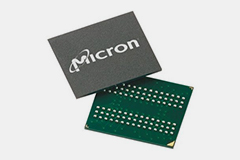 Dynamic random-access memory (DRAM) is a type of random access semiconductor memory that stores each bit of data in a memory cell consisting of a tiny capacitor and a transistor, both typically based on metal-oxide-semiconductor (MOS) technology.DRAM typically takes the form of an integrated circuit chip, which can consist of dozens to billions of DRAM memory cells. DRAM chips are widely used in digital electronics where low-cost and high-capacity computer memory is required. One of the largest applications for DRAM is the main memory in modern computers and graphics cards.